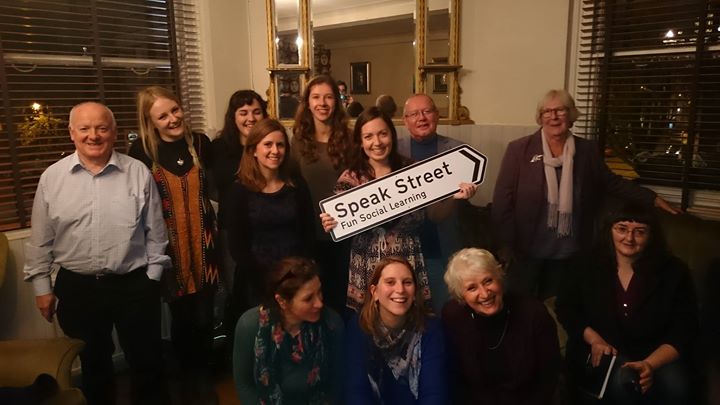 Taking a walk down Speak Street

For many Brits, the thought of living abroad or learning a new language remains within the realm of the exotic. According to statistics from a European Union survey, 62% of the British survey participants are limited to their native tongue, whereas 51% of EU citizens from the EU can hold a conversation as a foreign speaker of English.

However, before those of you reading this sigh – anticipating the reproach of yet another shame-mongering article bemoaning your linguistic ignorance – and turn to something else to fill 5 minutes, let me assure you that I’m not here to lecture. Instead, let’s take an optimistic look at the current situation and take a walk down Speak Street.

The pop-up phenomenon shouldn’t be foreign to city dwellers, and certainly doesn’t deter the frequenters of this London-based social enterprise. Speak Street, launched by Joanna Bevan (more about her shortly!) in October 2014, comprises a group of pro-active adults and volunteer teachers who get together in London to share the experience of foreign language learning. Classes in French and Spanish run for native Anglophones, and English sessions for non-natives looking to strengthen their language skills. Their content is functional and relevant; participants can master how to speak to landlords and employees, and make everyday conversation to facilitate social insertion.

It’s a simple idea with firm roots in ‘permaculture’ design. Its founder, Joanna – herself quatri-lingual and a fellow of the School for Social Entrepreneurs – is a huge advocate for Permaculture and has built her social enterprise using it.

‘Permaculture is an agricultural method which builds stronger, more sustainable crops and ecosystems,’ she says, ‘and what’s more, without waste. Speak Street allows for the strengthening symbiotic relationships between local residents and their surrounding community. The language learning is just a vehicle for this; speakers benefit mutually from the tandem experience and café owners gain a friendly, local clientele who bring in some steady custom. We don’t hire or own classrooms; we thrive on the infrastructure which is already readily available to us in the local area, reducing waste.’

The analogy doesn’t end there. Permaculture and sustainable ecosystems rely on (bio)diversity, and this is something the capital certainly provides. Of course, for Speak Street to function, it requires participants from a range of ethnic, cultural and linguistic backgrounds. And the rule applies that the greater the biodiversity, the stronger the community; Speak Street welcomes not only fellow Europeans, but Latinos, South-Asians and Africans as well as native Brits.

Ultimately, having fun together in a stimulating environment is a means to greater community cohesion. According to Native French tutor Antonia Jenkins, Speak Street has a double goal, of ‘practising a language, while building a community’. She highlights the varied demographic of Speak Street and the motivations of her older learners, who visit the sessions for a dose of intellectual rigour, or ‘brain gym’.

Of course, the diversity of London offers the UK’s most fertile soil for cultivating such social enterprises. However, with the right exposure and participation, this sustainable, low cost set-up could very well become the template for rolling out nationwide.

All I can say is bienvenue, bienvenido and ‘welcome’ to a model of social cohesion which, with the right foundations, nourishment and cultivation, has the potential to thrive for many years to come.